Jens Andermann is reader in Latin American and Luso-Brazilian Studies at Birkbeck College, University of London. He is the coeditor of Images of Power: Iconography, Culture and the State in Latin America. 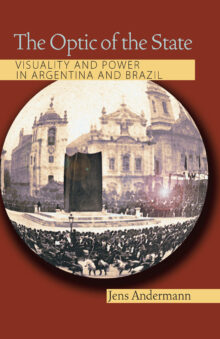 The Optic of the State

Visuality and Power in Argentina and Brazil

The Optic of the State traces the production of nationalist imaginaries through the public visual representation of modern state formation in Brazil and Argentina. As Jens Andermann reveals, the foundational visions of national heritage, territory, and social and ethnic composition were conceived and implemented, but also disputed and contested, in a complex interplay between government, cultural, and scientific institutions and actors, as a means of propagating political agendas and power throughout the emerging states.

The purpose of these imaginaries was to vindicate the political upheavals of the recent past and secure the viability of the newly independent states through a sense of historic destiny and inevitable evolution. The careful presentation of artifacts and spectacles was also aimed abroad in order to win the favor of European imperial powers and thereby acquire a competitive place in the nascent global economy of the late nineteenth century.

The Optic of the State offers a fascinating critique of the visual aspects of national mythology. It exposes how scientific and cultural institutions inscribed the state-form in time and space, thus presenting historical processes as natural “givens.”