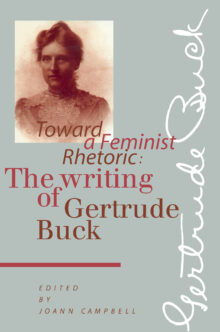 Toward a Feminist Rhetoric

The Writing of Gertrude Buck

The nature of Gertrude Buck, professor of English at Vassar College from 1897 until her death in 1922, is well-known to anyone interested in the history of composition. Her writing is less well-known, much of it now out of print. JoAnn Campbell gathers together for the first time the major work of this innovative thinker and educator, including her most important articles on rhetorical theory; The Social Criticism of Literature, a forerunner of reader-response literary theory; selections from her textbooks on argumentative and expository writing; poetry; fiction; her play Mother-Love, and unpublished reports and correspondence from the English department at Vassar.
In her introduction, Campbell describes the masculine rhetorical tradition within which Buck wrote and taught. Her theories of language and composition quietly challenged the dominant rhetorics issuing from Harvard and Amherst. An unusually productive scholar, Buck wrote textbooks for her female students that affirmed women’s intellectual abilities and trained them to participate in political debate. In the Vassar English Department she found a community of women among whom she could practice and develop her theories regarding rhetoric, pedagogy, and the role of the individual in society.