John McCannon is professor of history at Southern New Hampshire University and the author of many works on modern Russia and remote regions, including Red Arctic: Polar Exploration and the Myth of the North in the Soviet Union, 1932–1939 and A History of the Arctic: Nature, Exploration, and Exploitation. 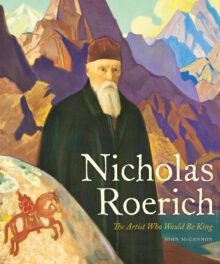 The Artist Who Would Be King

Russian painter, explorer, and mystic Nicholas Roerich (1874–1947) ranks as one of the twentieth century’s great enigmas. Despite mystery and scandal, he left a deep, if understudied, cultural imprint on Russia, Europe, India, and America. As a painter and set designer Roerich was a key figure in Russian art. He became a major player in Diaghilev’s Ballets Russes, and with Igor Stravinsky he cocreated The Rite of Spring, a landmark work in the emergence of artistic modernity. His art, his adventures, and his peace activism earned the friendship and admiration of such diverse luminaries as Albert Einstein, Eleanor Roosevelt, H. G. Wells, Jawaharlal Nehru, Raisa Gorbacheva, and H. P. Lovecraft.
But the artist also had a darker side. Stravinsky once said of Roerich that “he ought to have been a mystic or a spy.” He was certainly the former and close enough to the latter to blur any distinction. His travels to Asia, supposedly motivated by artistic interests and archaeological research, were in fact covert attempts to create a pan-Buddhist state encompassing Siberia, Mongolia, and Tibet. His activities in America touched Franklin Delano Roosevelt’s cabinet with scandal and, behind the scenes, affected the course of three US presidential elections.
In his lifetime, Roerich baffled foreign affairs ministries and intelligence services in half a dozen countries. He persuaded thousands that he was a humanitarian and divinely inspired thinker—but convinced just as many that he was a fraud or a madman. His story reads like an epic work of fiction and is all the more remarkable for being true. John McCannon’s engaging and scrupulously researched narrative moves beyond traditional perceptions of Roerich as a saint or a villain to show that he was, in many ways, both in equal measure.