Jonathan A. Grant is assistant professor of modern Russian history at Florida State University, Tallahassee, and is the author of numerous articles, most recently “Banks, Boards, and the Question of Bank Dominance in Late Imperial Russia: The Case of the Putilov Company, 1907-1914” published in Essays in Economic and Business History, and seven articles about the relationship between tsarist Russia and Eastern Europe in Encyclopedia of Modern East Europe, 1815-1989. 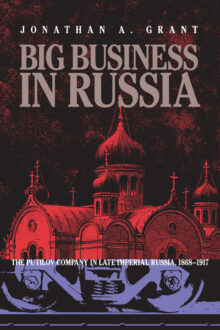 By Jonathan A. Grant

Jonathan A. Grant has written a highly original study of the Putilov works&mdash;the most famous industrial conglomerate in the Russian Empire during the late nineteenth and early twentieth centuries. With the emergence of a capitalist system in the Russian federation in the 1990s, scholarly debate over the nature of Russian capitalism has been revived, and with this study, Grant issues a major challenge to the conventional wisdom on the nature of the Russian economy in the years before the Bolshevik revolution. Grant argues that the Putilov Company, which manufactured arms for the Russian state and a wide range of heavy industrial equipment for civilian use, adopted business practices that resembled the experiences of large machinery and armaments manufacturers in Britain, France, the Austro-Hungarian Empire, and Germany. This interpretation runs directly counter to the traditional and widely held view that Russian capitalism was shaped by the tsarist state's orders and subsidies and that the tsarist system was incompatible with the development of modern capitalism. Grant makes direct comparisons between Putilov and the famous western firm of Krupp and Vickers, illustrating similar business decisions made by both companies in terms of diversification of the product line and a penchant for private (as opposed to state) markets for primary income.

Grant has gone beyond Soviet works on the Putilov plant, examining archival documents of the company and offering critical comments on both Soviet and Western scholarship on Russian economic and social history from the perspective of this important industrial enterprise. Grant not only repeatedly demonstrates that the Putilov firm responded effectively to the changing market for its wide range of industrial products but also shows that the tsarist regime provided far more of the “systemic regularity” needed for capitalist development than generally believed. Grant's work is a significant contribution to this ongoing debate, offering a much-needed case study of Russian business history and a comparative study that extends across national boundaries. Big Business in Russia is essential reading for graduate students in Russian and European history and will also appeal to American and European business leaders eager to understand the historical background of the current economic challenges facing Russia.