Jonathan Brooks Platt is assistant professor of Slavic languages and literatures at the University of Pittsburgh. 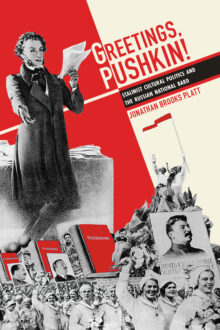 In 1937, the Soviet Union mounted a national celebration commemorating the centenary of poet Alexander Pushkin’s death. Though already a beloved national literary figure, the scale and feverish pitch of the Pushkin festival was unprecedented. Greetings, Pushkin! presents the first in-depth study of this historic event and follows its manifestations in art, literature, popular culture, education, and politics, while also examining its philosophical underpinnings. Jonathan Brooks Platt looks deeply into the motivations behind the Soviet glorification of a long-dead poet—seemingly at odds with the October Revolution’s radical break with the past. He views the Pushkin celebration as a conjunction of two opposing approaches to time and modernity: monumentalism, which points to specific moments and individuals as the origin point for cultural narratives, and eschatology, which glorifies ruptures in the chain of art or thought and the destruction of canons. In the midst of the Great Purge, the Pushkin jubilee was a critical element in the drive toward a nationalist discourse that attempted to unify and subsume the disparate elements of the Soviet Union, supporting the move to “socialism in one country.”