Jorge A. Nallim is associate professor of history at the University of Manitoba. 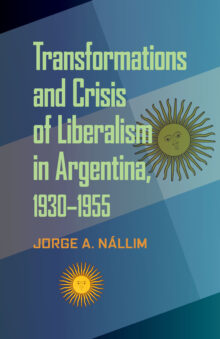 Transformations and Crisis of Liberalism in Argentina, 1930–1955

Nállim chronicles the decline of liberalism in Argentina during the volatile period between two military coups—the 1930 overthrow of Hipólito Yrigoyen and the deposing of Juan Perón in 1955. While historians have primarily focused on liberalism in economic or political contexts, Nállim instead documents a wide range of locations where liberalism was claimed and ultimately marginalized in the pursuit of individual agendas.

Nállim shows how concepts of liberalism were espoused by various groups who “invented traditions” to legitimatize their methods of political, religious, class, intellectual, or cultural hegemony. In these deeply fractured and corrupt processes, liberalism lost political favor and alienated the public. These events also set the table for Peronism and stifled the future of progressive liberalism in Argentina.

Nállim describes the main political parties of the period and deconstructs their liberal discourses. He also examines major cultural institutions and shows how each attached liberalism to their cause.

Nállim compares and contrasts the events in Argentina to those in other Latin American nations and reveals their links to international developments. While critics have positioned the rhetoric of liberalism during this period as one of decadence or irrelevance, Nállim instead shows it to be a vital and complex factor in the metamorphosis of modern history in Argentina and Latin America as well.