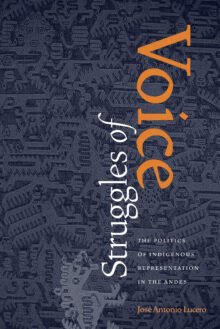 The Politics of Indigenous Representation in the Andes

Over the last two decades, indigenous populations in Latin America have achieved a remarkable level of visibility and political effectiveness, particularly in Ecuador and Bolivia. In Struggles of Voice, José Antonio Lucero examines these two outstanding examples in order to understand their different patterns of indigenous mobilization and to reformulate the theoretical model by which we link political representation to social change.

Building on extensive fieldwork, Lucero considers Ecuador's united indigenous movement and compares it to the more fragmented situation in Bolivia. He analyzes the mechanisms at work in political and social structures to explain the different outcomes in each case. Lucero assesses the intricacies of the many indigenous organizations and the influence of various NGOs to uncover how the conflicts within social movements, the shifting nature of indigenous identities, and the politics of transnationalism all contribute to the success or failure of political mobilization.

Blending philosophical inquiry with empirical analysis, Struggles of Voice is an informed and incisive comparative history of indigenous movements in these two Andean countries. It helps to redefine our understanding of the complex intersections of social movements and political representation.