Josep Simon is an associate professor in history of science, technology, and medicine, at Universidad del Rosario, Colombia. 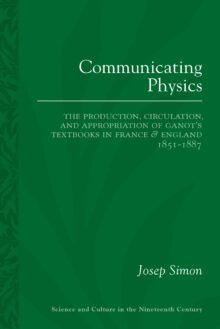 The Production, Circulation, and Appropriation of Ganot's Textbooks in France and England, 1851–1887

The textbooks written by Adolphe Ganot (1804-1887) played a major role in shaping the way physics was taught in the nineteenth century. Ganot’s books were translated from their original French into more than ten languages, including English, allowing their adoption as standard works in Britain and spreading their influence as far as North America, Australia, India and Japan.

Simon’s Franco-British case study looks at the role of Ganot’s two textbooks: Traite elementaire de physique experimentale et appliquee (1851) and Cours de physique purement experimentale (1859), and their translations into English by Edmund Atkinson. The study is novel for its international comparison of nineteenth-century physics, its acknowledgement of the role of book production on the impact of the titles, and for its emphasis on the role of communication in the making of science.