Joseph A. Pratt is the NEH-Cullen Professor of History and Business at the University of Houston where he has served as chair of the history department and interim dean of the College of Liberal Arts and Social Sciences. He is the coordinator of the Energy Management and Policy Group at the University of Houston and the director of the Houston History Project. Pratt has written extensively on both the history of the petroleum industry and Houston. His latest book is Exxon: Transforming Energy, 1973-2005. 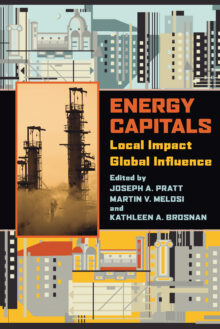 Fossil fuels propelled industries and nations into the modern age and continue to powerfully influence economies and politics today. As Energy Capitals demonstrates, the discovery and exploitation of fossil fuels has proven to be a mixed blessing in many of the cities and regions where it has occurred.

With case studies from the United States, Canada, Mexico, Norway, Africa, and Australia, this volume views a range of older and more recent energy capitals, contrasts their evolutions, and explores why some capitals were able to influence global trends in energy production and distribution while others failed to control even their own destinies. Chapters show how local and national politics, social structures, technological advantages, education systems, capital, infrastructure, labor force, supply and demand, and other factors have affected the ability of a region to develop and control its own fossil fuel reserves. The contributors also view the environmental impact of energy industries and demonstrate how, in the depletion of reserves or a shift to new energy sources, regions have or have not been able to recover economically.

The cities of Tampico, Mexico, and Port Gentil, Gabon, have seen their oil deposits exploited by international companies with little or nothing to show in return and at a high cost environmentally. At the opposite extreme, Houston, Texas, has witnessed great economic gain from its oil, natural gas, and petrochemical industries. Its growth, however, has been tempered by the immense strain on infrastructure and the human transformation of the natural environment. In another scenario, Perth, Australia, Calgary, Alberta, and Stavanger, Norway have benefitted as the closest established cities with administrative and financial assets for energy production that was developed hundreds of miles away.

Whether coal, oil, or natural gas, the essays offer important lessons learned over time and future considerations for the best ways to capture the benefits of energy development while limiting the cost to local populations and environments. 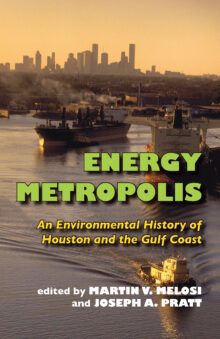 An Environmental History of Houston and the Gulf Coast

Houston's meteoric rise from a bayou trading post to the world's leading oil supplier owes much to its geography, geology, and climate: the large natural port of Galveston Bay, the lush subtropical vegetation, the abundance of natural resources. But the attributes that have made it attractive for industry, energy, and urban development have also made it particularly susceptible to a variety of environmental problems. Energy Metropolis presents a comprehensive history of the development of Houston, examining the factors that have facilitated unprecedented growth-and the environmental cost of that development.
The landmark Spindletop strike of 1901 made inexpensive high-grade Texas oil the fuel of choice for ships, industry, and the infant automobile industry. Literally overnight, oil wells sprang up around Houston. In 1914, the opening of the Houston Ship Channel connected the city to the Gulf of Mexico and international trade markets. Oil refineries sprouted up and down the channel, and the petroleum products industry exploded. By the 1920s, Houston also became a leading producer of natural gas, and the economic opportunities and ancillary industries created by the new energy trade led to a population boom. By the end of the twentieth century, Houston had become the fourth largest city in America.
Houston's expansion came at a price, however. Air, water, and land pollution reached hazardous levels as legislators turned a blind eye. Frequent flooding of altered waterways, deforestation, hurricanes, the energy demands of an air-conditioned lifestyle, increased automobile traffic, exponential population growth, and an ever-expanding metropolitan area all escalated the need for massive infrastructure improvements.
The experts in Energy Metropolis examine the steps Houston has taken to overcome laissez-faire politics, indiscriminate expansion, and infrastructural overload. What emerges is a profound analysis of the environmental consequences of large-scale energy production and unchecked growth.