Joseph Frazier Wall is professor emeritus of history at Grinell College in Iowa. 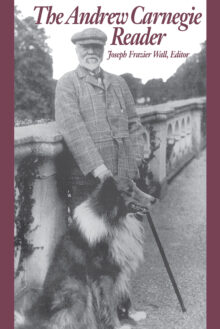 “Andrew Carnegie is the only American entrepreneur who could have won distinction as an author, even if he had never seen a steel mill,” writes Joseph Frazier Wall. A skillful and prolific writer, Andrew Carnegie published sixty three articles in major magazines of his time, such as The North American Review, and eight books. Although he is best remembered today for the radical philosophy expressed in the title essay of his book The Gospel of Wealth, his other writings are readable and provocative.

The Andrew Carnegie Reader is the first anthology to bring together in a single volume a representative selection of Carnegie’s writings which show him as a shrewd businessman, celebrated philanthropist, champion of democracy, and eternal optimist. Carnegie’s first letter to the editor at the age of seventeen was the beginning of a lifelong attempt to satisfy an insatiable journalistic desire. Always voluble and candid, Carnegie was as active with his pen as with his tongue.

This intriguing collection covers sixty years of the industrial giant’s life, from his letters to his cousin George Lauder, written in 1853, to the final chapter od his autobiography, completed in 1914. In his own simple, abrupt style, colored with fierce optimism, Carnegie captivated his audience.

Although most of the selections were penned for an audience now long gone, today’s reader will be intrigued by the pertinence and timelessness of Carnegie’s hopes for world peace, his views on labor, and his concern for better race relations in America and their continuing applicability to humankind. A brief essay by the editor introduces each selection.