Joseph S. Cialdella is the program manager for public scholarship at the University of Michigan. 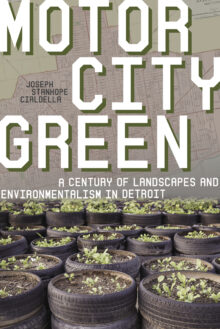 A Century of Landscapes and Environmentalism in Detroit

Motor City Green is a history of green spaces in metropolitan Detroit from the late nineteenth to the early twenty-first century. The book focuses primarily on the history of gardens and parks in the city of Detroit and its suburbs in southeast Michigan. Cialdella argues that Detroit residents used green space to address problems created by the city’s industrial rise and decline, and racial segregation and economic inequality. As the city’s social landscape became increasingly uncontrollable, Detroiters turned to parks, gardens, yards, and other outdoor spaces to relieve the negative social and environmental consequences of industrial capitalism. Motor City Green looks to the past to demonstrate how today’s urban gardens in Detroit evolved from, but are also distinct from, other urban gardens and green spaces in the city’s past.