Joshua M. Rosenthal is associate professor and cochair of the Department of History and Non-Western Cultures at Western Connecticut State University. 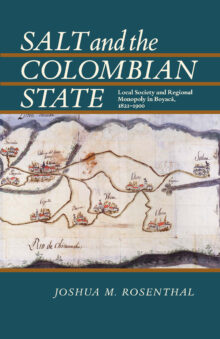 Salt and the Colombian State

In republican Colombia, salt became an important source of revenue not just to individuals, but to the state, which levied taxes on it and in some cases controlled and profited from its production. The salt trade consistently accounted for roughly ten percent of government income.

In the town of la Salina de Chita, in Boyacá province, thermal springs offered vast amounts of salt, and its procurement and distribution was placed under the jurisdiction of the Ministry of Finance. Focusing his study on la Salina, Joshua M. Rosenthal presents a fascinating glimpse into the workings of the early Colombian state, its institutions, and their interactions with local citizens during this formative period. Although historians have cited the stateÆs weakness, and in many cases, its absence in local affairs, Rosenthal counters these assumptions by documenting the primary role the state held in administering contracts, inspections, land rights, labor, and trade in la Salina, and contends that this was not an isolated incident. He also uncovers the frequent interaction between the state and local residents, who used the stateÆs liberal rhetoric to gain personal economic advantage.

Seen through the lens of the administration of la SalinaÆs salt works, Rosenthal provides a firsthand account of the role of local institutions and fiscal management in the larger process of state building. His study offers new perspectives on the complex network of republican ColombiaÆs political culture, and its involvement in provincial life across the nation.