Juan de Dios Yapita is visiting professor at Birkbeck College London, and co-author of Compendio aymara. He is the author of a series of Aymara poems in the collection Las lenguas de América: Recital de poesía. 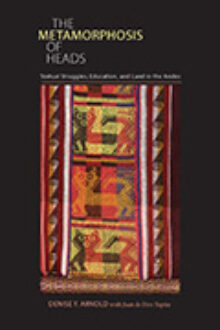 The Metamorphosis of Heads

Textual Struggles, Education, and Land in the Andes

Since the days of the Spanish Conquest, the indigenous populations of Andean Bolivia have struggled to preserve their textile-based writings. This struggle continues today, both in schools and within the larger culture. The Metamorphosis of Heads explores the history and cultural significance of Andean textile writings–weavings and kipus (knotted cords), and their extreme contrasts in form and production from European alphabet-based texts. Denise Arnold examines the subjugation of native texts in favor of European ones through the imposition of homogenized curricula by the Educational Reform Law. As Arnold reveals, this struggle over language and education directly correlates to long-standing conflicts for land ownership and power in the region, since the majority of the more affluent urban population is Spanish speaking, while indigenous languages are spoken primarily among the rural poor. <I>The Metamorphosis of Heads</I> acknowledges the vital importance of contemporary efforts to maintain Andean history and cultural heritage in schools, and shows how indigenous Andean populations have incorporated elements of Western textual practices into their own textual activities.
Based on extensive fieldwork over two decades, and historical, anthropological, and ethnographic research, Denise Arnold assembles an original and richly diverse interdisciplinary study. The textual theory she proposes has wider ramifications for studies of Latin America in general, while recognizing the specifically regional practices of indigenous struggles in the face of nation building and economic globalization.