Juan Pablo Dabove is professor of Spanish and Portuguese at the University of Colorado at Boulder. He is the author of Nightmares of the Lettered City: Banditry and Literature in Latin America, 1816-1929. 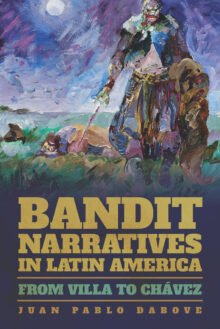 From Villa to Chávez

Bandits seem ubiquitous in Latin American culture. Even contemporary actors of violence are framed by narratives that harken back to old images of the rural bandit, either to legitimize or delegitimize violence, or to intervene in larger conflicts within or between nation-states. However, the bandit escapes a straightforward definition, since the same label can apply to the leader of thousands of soldiers (as in the case of Villa) or to the humble highwayman eking out a meager living by waylaying travelers at machete point. Dabove presents the reader not with a definition of the bandit, but with a series of case studies showing how the bandit trope was used in fictional and non-fictional narratives by writers and political leaders, from the Mexican Revolution to the present. By examining cases from Argentina, Brazil, Mexico, Peru, and Venezuela, from Pancho Villa’s autobiography to Hugo Chávez’s appropriation of his “outlaw” grandfather, Dabove reveals how bandits function as a symbol to expose the dilemmas or aspirations of cultural and political practices, including literature as a social practice and as an ethical experience. 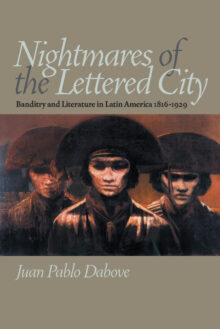 Nightmares of the Lettered City

Nightmares of the Lettered City presents an original study of the popular theme of banditry in works of literature, essays, poetry, and drama, and banditry's pivotal role during the conceptualization and formation of the Latin American nation-state.
Juan Pablo Dabove examines writings over a broad time period, from the early nineteenth century to the 1920s, and while Nightmares of the Lettered City focuses on four crucial countries (Argentina, Mexico, Brazil, and Venezuela), it is the first book to address the depiction of banditry in Latin America as a whole. The work offers close reading of Facundo, Dou00f1a Bárbara, Os Sertu00f5es, and Martín Fierro, among other works, illuminating the ever-changing and often contradictory political agendas of the literary elite in their portrayals of the forms of peasant insurgency labeled “banditry.”
Banditry has haunted the Latin American literary imagination. As a cultural trope, banditry has always been an uneasy compromise between desire and anxiety (a “nightmare”), and Dabove isolates three main representational strategies. He analyzes the bandit as radical other, a figure through which the elites depicted the threats posed to them by various sectors outside the lettered city. Further, he considers the bandit as a trope used in elite internecine struggles. In this case, rural insurgency was a means to legitimize or refute an opposing sector or faction within the lettered city. Finally, Dabove shows how, in certain cases, the bandit was used as an image of the nonstate violence that the nation state has to suppress as a historical force and simultaneously exalt as a memory in order to achieve cultural coherence and actual sovereignty.
As Dabove convincingly demonstrates, the elite's construction of the bandit is essential to our understanding of the development of the Latin American nation in the nineteenth and early twentieth centuries.