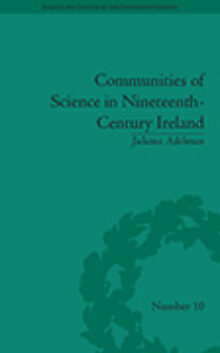 Communities of Science in Nineteenth-Century Ireland

The nineteenth century was an important period for both the proliferation of “popular” science and for the demarcation of a group of professionals that we now term scientists. Of course for Ireland, largely in contrast to the rest of Britain, the prominence of Catholicism posed various philosophical questions regarding research.

Adelman’s study examines the practical educational impact of the growth of science in these communities, and the impact of this on the country’s economy; the role of museums and exhibitions in spreading scientific knowledge; and the role that science had to play in Ireland’s turbulent political context.

Adelman challenges historians to reassess the relationship between science and society, showing that the unique situation in Victorian Ireland can nonetheless have important implications for wider European interpretations of the development of this relationship during a period of significant change.