Julie Ann Ward is assistant professor of Latin American literature at the University of Oklahoma. 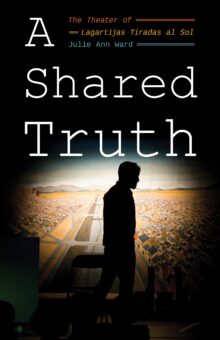 Lagartijas Tiradas al Sol (Lizards Lounging in the Sun) is a Mexican theater company that performs what is known as theater of the real.By taking reality as its subject, this genre claims a special relationship to reality, truth, and authenticity. In A Shared Truth, Julie Ann Ward traces the development of this contemporary and cutting-edge collective’s unique aesthetic. Based on performances, play texts, videos, and interviews, this in-depth look at a single theatrical troupe argues that the company’s work represents a larger trend in which Latin American theater positions itself as a source of and repository for truth in the face of unreliable official narratives. A Shared Truth critically examines the work of an influential company whose collaborative methods and engagement with the real challenge the bounds of theater.