Kenneth M. Straus is a former assistant professor of history at Binghamton University. 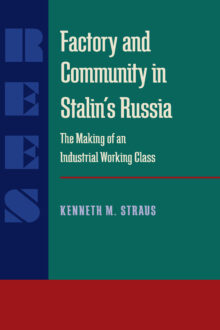 Factory and Community in Stalin’s Russia

The Making of an Industrial Working Class

Kenneth Straus weaves together many threads in Russian social history to develop a new theory of working-class formation in the years of Stalin’s First Five Year Plan. In so doing, he addresses a long-standing debate among historians by suggesting new answers to an old question: Was there social support for the Stalin regime among the Soviet working class during the 1930s, and if so, why?

Straus argues that the keys for interpreting Stalinism lie in occupational specialization, on the one hand, and community organization, on the other. He focuses on the daily life of the new Soviet workers in the factory and community, arguing that the most significant new trends saw peasants becoming open hearth steel workers, housewives becoming auto assembly line workers and machine operatives, and youth training en masse rather than occupations categories in the vocational schools in the factories, the FZU.

Tapping archival material only recently available and a wealth of published sources, Straus presents Soviet social history within a new analytical framework, suggesting that Stalinist forced industrialization and Soviet proletarianization is best understood within a comparative European framework, in which the theories of Marx, Durkheim, and Weber best elucidate both the broad similarities with Western trends and the striking exceptional aspects of the Soviet experience.