Kenneth P. Serbin is assistant professor of history at the University of San Diego. He received his B.A. in history from Yale (1982) and his Ph.D. from the University of California, San Diego (1993). He was a fellow of the Helen Kellogg Institute for International Studies at the University of Notre Dame (1992) and a research associate of the North-South Center at the University of Miami (1992-1993). His articles have appeared in the Hispanic American Historical Review, Journal of Latin American Studies, Christian Century, National Catholic Reporter, In These Times, and other periodicals. 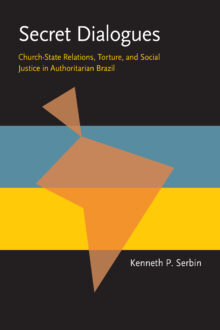 Secret Dialogues uncovers an unexpected development in modern Latin American history: the existence of secret talks between generals and Roman Catholic bishops at the height of Brazil's military dictatorship. During the brutal term of Emílio Garrastazú Médici, the Catholic Church became famous for its progressivism. However, new archival sources demonstrate that the church also sought to retain its privileges and influence by exploring a potential alliance with the military. From 1970 to 1974 the secret Bipartite Commission worked to resolve church-state conflict and to define the boundary between social activism and subversion. As the bishops increasingly made defense of human rights their top pastoral and political goal, the Bipartite became an important forum of protest against torture and social injustice. Based on more than 60 interviews and primary sources from three continents, Secret Dialogues is a major addition to the historical narrative of the most violent yet, ironically, the least studied period of the Brazilian military regime. Its story is intertwined with the central themes of the era: revolutionary warfare, repression, censorship, the fight for democracy, and the conflict between Catholic notions of social justice and the anticommunist Doctrine of National Security.

Secret Dialogues is the first book of its kind on the contemporary Catholic Church in any Latin American country, for most work in this field is devoid of primary documentary research. Serbin questions key assumptions about church-state conflict such as the typical conservative-progressive dichotomy and the notion of church-state rupture during harsh authoritarian periods. Secret Dialogues is written for undergraduate and graduate students, professional scholars, and the general reader interested in Brazil, Latin America, military dictatorship, human rights, and the relationship between religion and politics.