Kenneth Warren was Emeritus Fellow of Jesus College, University of Oxford, and the author of numerous books, including Big Steel: The First Century of the United States Steel Corporation 1901–2001; Wealth, Waste, and Alienation: Growth and Decline in the Connellsville Coke Industry; and Bethlehem Steel: Builder and Arsenal of America. 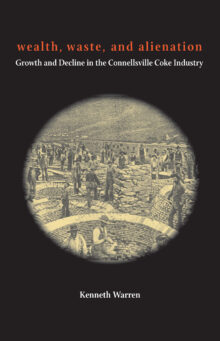 Growth and Decline in the Connellsville Coke Industry 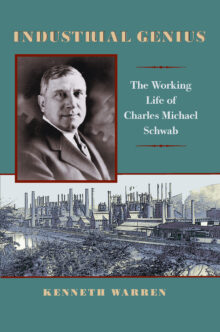 Charles Schwab was known to his employees, business associates, and competitors as a congenial and charismatic person-a 'born salesman.' Yet Schwab was much more than a salesman-he was a captain of industry, a man who streamlined and economized the production of steel and ran the largest steelmaking conglomerate in the world. A self-made man, he became one of the wealthiest Americans during the Gilded Age, only to die penniless in 1939.
Schwab began his career as a stake driver at Andrew Carnegie's Edgar Thomson steel works in Pittsburgh at the age of seventeen. By thirty-five, he was president of Carnegie Steel. In 1901, he helped form the U.S. Steel Corporation, a company that produced well over half the nation's iron and steel. In 1904, Schwab left U.S. Steel to head Bethlehem Steel, which after twelve years under his leadership, became the second-largest steel producer in America. President Woodrow Wilson called on Schwab to head the Emergency Fleet Corporation to produce merchant ships for the transport of troops and materials abroad during World War I.
Kenneth Warren presents a compelling biography that chronicles the startling success of Schwab's business career, his leadership abilities, and his drive to advance steel-making technology and operations. Through extensive research and use of previously unpublished archival documentation, Warren offers a new perspective on the life of a monumental figure–a true visionary–in the industrial history of America. 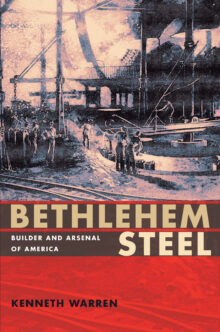 Builder and Arsenal of America

In the late 19th century, rails from Bethlehem Steel helped build the United States into the world's foremost economy. During the 1890s, Bethlehem became America's leading supplier of heavy armaments, and by 1914, it had pioneered new methods of structural steel manufacture that transformed urban skylines. Demand for its war materials during World War I provided the finance for Bethlehem to become the world's second-largest steel maker. As late as 1974, the company achieved record earnings of $342 million. But in the 1980s and 1990s, through wildly fluctuating times, losses outweighed gains, and Bethlehem struggled to downsize and reinvest in newer technologies. By 2001, in financial collapse, it reluctantly filed for Chapter 11 bankruptcy protection. Two years later, International Steel Group acquired the company for $1.5 billion.

In Bethlehem Steel, Kenneth Warren presents an original and compelling history of a leading American company, examining the numerous factors contributing to the growth of this titan and those that eventually felled it&mdash;along with many of its competitors in the U.S. steel industry.

Bethlehem Steel provides a fascinating case study in the transformation of a major industry from one of American dominance to one where America struggled to survive. 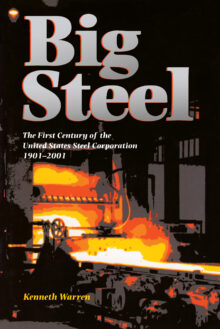 The First Century of the United States Steel Corporation 1901-2001

At its formation in 1901, the United States Steel Corporation was the earth’s biggest industrial corporation, a wonder of the manufacturing world. Immediately it produced two thirds of America’s raw steel and thirty percent of the steel made worldwide. The behemoth company would go on to support the manufacturing superstructure of practically every other industry in America. It would create and sustain the economies of many industrial communities, especially Pittsburgh, employing more than a million people over the course of the century.

A hundred years later, the U.S. Steel Group of USX makes scarcely ten percent of the steel in the United States and just over one and a half percent of global output. Far from the biggest, the company is now considered the most efficient steel producer in the world. What happened between then and now, and why, is the subject of Big Steel, the first comprehensive history of the company at the center of America’s twentieth-century industrial life.

Granted privileged and unprecedented access to the U.S. Steel archives, Kenneth Warren has sifted through a long, complex business history to tell a compelling story. Its preeminent size was supposed to confer many advantages to U.S. Steel&mdash;economies of scale, monopolies of talent, etc. Yet in practice, many of those advantages proved illusory. Warren shows how, even in its early years, the company was out-maneuvered by smaller competitors and how, over the century, U.S. Steel’s share of the industry, by every measure, steadily declined.

Warren’s subtle analysis of years of internal decision making reveals that the company’s size and clumsy hierarchical structure made it uniquely difficult to direct and manage. He profiles the chairmen who grappled with this “lumbering giant,” paying particular attention to those who long ago created its enduring corporate culture&mdash;Charles M. Schwab, Elbert H. Gary, and Myron C. Taylor.

Warren points to the way U.S. Steel’s dominating size exposed it to public scrutiny and government oversight&mdash;a cautionary force. He analyzes the ways that labor relations affected company management and strategy. And he demonstrates how U.S. Steel suffered gradually, steadily, from its paradoxical ability to make high profits while failing to keep pace with the best practices. Only after the drastic pruning late in the century&mdash;when U.S. Steel reduced its capacity by two-thirds&mdash;did the company become a world leader in steel-making efficiency, rather than merely in size.

These lessons, drawn from the history of an extraordinary company, will enrich the scholarship of industry and inform the practice of business in the twenty-first century. 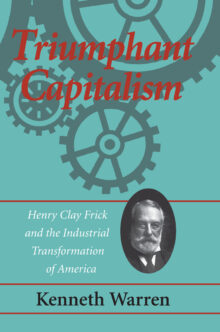 Henry Clay Frick and the Industrial Transformation of America

A detailed, carefully wrought business biography of Henry Clay Frick, one of the leading entrepreneurs in American heavy industry during the late nineteenth and early twentieth centuries. Kenneth Warren has provided not only insight into the life of Henry Clay Frick, but a major contribution to our understanding of the history of the basic industries, the shaping of society, locality, and region – and thereby of laying the foundations for the value systems and landscapes of present-day America. 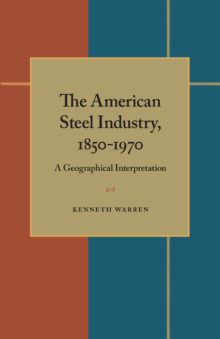 period of international leadership was challenged, this book interprets steel from the viewpoints of historical and economic geography. It considers both physical factors, such as resources, and human factors such as market, organization, and governmental policy.

In major discussions of the east coast, Pittsburgh, the Ohio Valley, the Great Lakes, the South and the West, Warren analyzes the location and relocation of steel plants over 120 years. He explains the influence on location of a variety of factors: The accessibility of resources, the cost of transportation, the existence of specialized markets, and the availability of entrepreneurial skills, capital, and labor. He also evaluates the role of management in the development of the industry, through an analysis of individual companies, including Bethlehem, Carnegie, United States Steel, Kaiser, Inland, Jones and Laughlin, and Youngstown Sheet and Tube.

Warren examines the influence exerted on the industry by complex technological changes and weighs their significance against market forces and the supply of natural resources. In the production process alone, the industry changed from pig iron to steel; from charcoal to anthracite; to bituminous coking coal; and from the widespread use of low-grade ore from the eastern United States, to the high quality but localized deposits of the Upper Great Lakes, to imported ores.

Unlike other industrialized nations, the United States has undergone major geographical shifts in steel consumption since the 1850s. As the American population moved south and west into new territory, steel followed. Warren concludes that these radical alterations in the distribution and demand were the decisive force in the location of steel production.