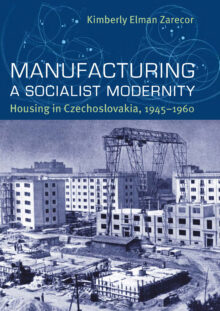 Eastern European prefabricated housing blocks are often vilified as the visible manifestations of everything that was wrong with state socialism. For many inside and outside the region, the uniformity of these buildings became symbols of the dullness and drudgery of everyday life. Manufacturing a Socialist Modernity complicates this common perception. Analyzing the cultural, intellectual, and professional debates surrounding the construction of mass housing in early postwar Czechoslovakia, Zarecor shows that these housing blocks served an essential function in the planned economy and reflected an interwar aesthetic, derived from constructivism and functionalism, that carried forward into the 1950s.

With a focus on prefabricated and standardized housing built from 1945 to 1960, Zarecor offers broad and innovative insights into the country’s transition from capitalism to state socialism. She demonstrates that during this shift, architects and engineers consistently strove to meet the needs of Czechs and Slovaks despite challenging economic conditions, a lack of material resources, and manufacturing and technological limitations. In the process, architects were asked to put aside their individual creative aspirations and transform themselves into technicians and industrial producers.

Manufacturing a Socialist Modernity is the first comprehensive history of architectural practice and the emergence of prefabricated housing in the Eastern Bloc. Through discussions of individual architects and projects, as well as building typologies, professional associations, and institutional organization, it opens a rare window into the cultural and economic life of Eastern Europe during the early postwar period.