Kinga Pozniak is an anthropologist and visiting scholar at the University of Western Ontario. 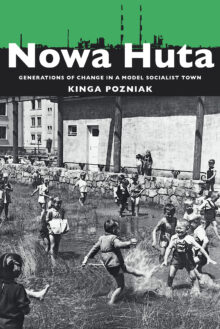 Generations of Change in a Model Socialist Town

In 1949 construction of the planned town of Nowa Huta began on the outskirts of Kraków, Poland. Its centerpiece, the Lenin Steelworks, promised a secure future for workers and their families. By the 1980s, however, the rise of the Solidarity movement and the ensuing shock therapy program of the early 1990s rapidly transitioned the country from socialism to a market-based economy, and Nowa Huta fell on hard times.

Kinga Pozniak shows how the remarkable political, economic, and social upheavals since the end of the Second World War have profoundly shaped the historical memory of these events in the minds of the people who lived through them. Through extensive interviews, she finds three distinct, generationally based framings of the past. Those who built the town recall the might of local industry and plentiful jobs. The following generation experienced the uprisings of the 1980s and remembers the repression and dysfunction of the socialist system and their resistance to it. Today’s generation has no direct experience with either socialism or Solidarity, yet as residents of Nowa Huta they suffer the stigma of lower-class stereotyping and marginalization from other Poles.

Pozniak examines the factors that lead to the rewriting of history and the formation of memory, and the use of history to sustain current political and economic agendas. She finds that despite attempts to create a single, hegemonic vision of the past and a path for the future, these discourses are always contested—a dynamic that, for the residents of Nowa Huta, allows them to adapt as their personal experience tells them.