Kristin D. Hussey is a historian of medicine and museum curator. She is currently a postdoctoral research fellow at the University of Copenhagen’s Medical Museion and Novo Nordisk Foundation Center for Basic Metabolic Research (CBMR). In 2018, she was the inaugural recipient of the McCarthy Award for the History of Medicine. 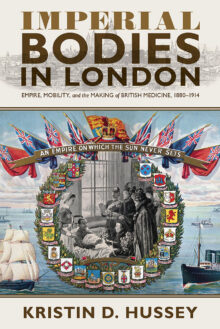 Since the eighteenth century, European administrators and officers, military men, soldiers, missionaries, doctors, wives, and servants moved back and forth between Britain and its growing imperial territories. The introduction of steam-powered vessels, and deep-docks to accommodate them at London ports, significantly reduced travel time for colonists and imperial servants traveling home to see their families, enjoy a period of study leave, or recuperate from the tropical climate. With their minds enervated by the sun, livers disrupted by the heat, and blood teeming with parasites, these patients brought the empire home and, in doing so, transformed medicine in Britain. With Imperial Bodies in London, Kristin D. Hussey offers a postcolonial history of medicine in London. Following mobile tropical bodies, her book challenges the idea of a uniquely domestic medical practice, arguing instead that British medicine was imperial medicine in the late Victorian era. Using the analytic tools of geography, she interrogates sites of encounter across the imperial metropolis to explore how medical research and practice were transformed and remade at the crossroads of empire.