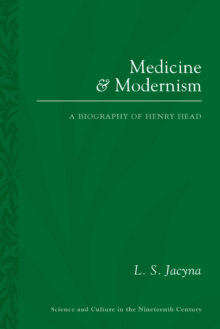 A Biography of Henry Head

This is the first in-depth study of the English neurologist and polymath Sir Henry Head (1861-1940). Head bridged the gap between science and the arts. He was a published poet who had close links with such figures as Thomas Hardy and Siegfried Sassoon. His research into the nervous system and the relationship between language and the brain broke new ground. L. S. Jacyna argues that these advances must be contextualized within wider Modernist debates about perception and language. In his time, Head was best known for his research into the human nervous system. He did a series of experiments in collaboration with W. H. R. Rivers in which cutaneous nerves were surgically severed in Head’s arm and the stages by which sensation returned were chartered over several years. Head’s friend, the philosopher Alfred North Whitehead, drew out the epistemological implications of how, in this new conception, the nervous system furthered the knowledge of the world.