Lesley Wylie is associate professor of Latin American Studies at the University of Leicester. She is the author of Colonial Tropes and Postcolonial Tricks: Rewriting the Tropics in the Novela de la Selva and Colombia’s Forgotten Frontier: A Literary Geography of the Putumayo. She is assistant editor of the Bulletin of Spanish Studies. 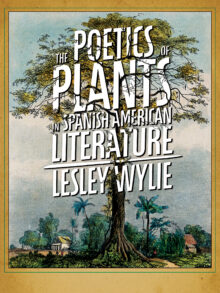 The Poetics of Plants in Spanish American Literature

The Poetics of Plants in Spanish American Literature examines the defining role of plants in cultural expression across Latin America, particularly in literature. From the colonial georgic to Pablo Neruda’s Canto general, Lesley Wylie’s close study of botanical imagery demonstrates the fundamental role of the natural world and the relationship between people and plants in the region. Plants are also central to literary forms originating in the Americas, such as the New World Baroque, described by Alejo Carpentier as “nacido de árboles.” The book establishes how vegetal imaginaries are key to Spanish American attempts to renovate European forms and traditions as well as to the reconfiguration of the relationship between humans and nonhumans. Such a reconfiguration, which persistently draws on indigenous animist ontologies to blur the boundaries between people and plants, anticipates much contemporary ecological thinking about our responsibility towards nonhuman nature and shows how environmental thinking by way of plants has a long history in Latin American literature.