Leslie C. Gates is associate professor of sociology and faculty affiliate of the Latin American and Caribbean Area Studies Program at Binghamton University. She is past chair of the Section on Political Economy of the World-System and current secretary of the Marxist Sociology Section of the American Sociological Association. 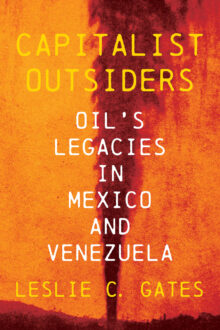 Oil's Legacies in Mexico and Venezuela

Social polarization has roiled neoliberal political establishments but has rarely culminated in electoral victories for anticapitalist outsiders. Instead, outsiders who accommodate capitalists often prevail. Capitalist Outsiders revisits celebrated exemplars of Latin American populism in Mexico and Venezuela to shed light on this phenomenon. It reveals how anticorruption campaigns boosted Mexico’s neoliberal-era capitalist outsider by drowning out salacious corporate scandals; how Venezuela’s apparently enlightened capitalist outsiders of the 1940s relied on segregationist, punitive labor relations; and how corporate insiders of Venezuela’s neoliberal political establishment unwittingly validated the anticapitalist Hugo Chávez as the true outsider. It weaves together these case studies to reveal an unlikely common origin for capitalist outsiders in both countries: their sequential insertion into global oil production and Mexico’s early twentieth-century radical oil workers. Capitalist Outsiders moves beyond cataloging “populist” traits and tactics or devising the institutions that might avert their rise. Instead, it specifies the distinct social bases of capitalist vs. anticapitalist outsiders. It exposes how a nation’s earlier incorporation into the capitalist world economy casts a long shadow over neoliberal-era outsider politics. 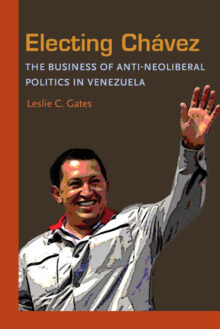 The Business of Anti-neoliberal Politics in Venezuela

Venezuela’s Hugo Chávez was the first anti-neoliberal presidential candidate to win in the region. Electing Chávez examines the circumstances that facilitated this pivotal election. By 1998, Venezuela had been rocked by two major scandals&mdash;the exchange rate incidents of the 1980s and the banking crisis of 1994&mdash;and had suffered rising social inequality. These events created a deep-seated distrust of establishment politicians. Chávez’s 1998 victory, however, was far from inevitable. Other presidential candidates also stood against corruption and promised a clean break from politics as usual. Moreover, business opposition to Chávez’s anti-neoliberal candidacy should have convinced voters that his victory would provoke a downward economic spiral.

In Electing Chávez, Leslie C. Gates examines how Chávez won over voters and even obtained the secret allegiance of a group of business “elite outliers,” with a reinterpretation of the relationship between business and the state during Venezuela’s era of two-party dominance (1959-1998). Through extensive research on corruption and the backgrounds of political leaders.

Gates tracks the rise of business-related corruption scandals and documents how business became identified with Venezuela’s political establishment. These trends undermined the public’s trust in business and converted business opposition into an asset for Chávez. This long history of business-tied politicians and the scandals they often provoked also framed the decisions of elite outliers. As Gates reveals, elite outliers supported Chávez despite his anti-neoliberal stance because they feared that the success of Chávez’s main rival would deny them access to Venezuela’s powerful oil state.