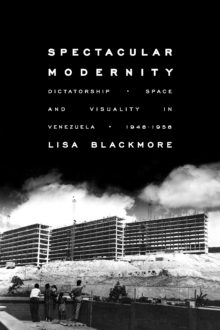 In cultural history, the 1950s in Venezuela are commonly celebrated as a golden age of modernity, realized by a booming oil economy, dazzling modernist architecture, and nationwide modernization projects. But this is only half the story. In this path-breaking study, Lisa Blackmore reframes the concept of modernity as a complex cultural formation in which modern aesthetics became deeply entangled with authoritarian politics. Drawing on extensive archival research and presenting a wealth of previously unpublished visual materials, Blackmore revisits the decade-long dictatorship to unearth the spectacles of progress that offset repression and censorship. Analyses of a wide range of case studies—from housing projects to agricultural colonies, urban monuments to official exhibitions, and carnival processions to consumer culture—reveal the manifold apparatuses that mythologized visionary leadership, advocated technocratic development, and presented military rule as the only route to progress. Offering a sharp corrective to depoliticized accounts of the period, Spectacular Modernity instead exposes how Venezuelans were promised a radically transformed landscape in exchange for their democratic freedoms.