Lisa Shaver is associate professor in professional writing and rhetoric and director of women’s and gender studies at Baylor University. She is the author of Beyond the Pulpit: Women’s Rhetorical Roles in the Antebellum Religious Press. 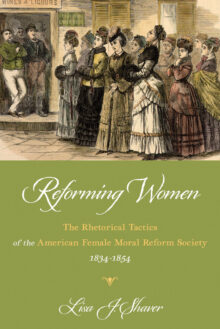 The Rhetorical Tactics of the American Female Moral Reform Society, 1834-1854

In Reforming Women, Lisa Shaver locates the emergence of a distinct women’s rhetoric and feminist consciousness in the American Female Moral Reform Society. Established in 1834, the society took aim at prostitution, brothels, and the lascivious behavior increasingly visible in America’s industrializing cities. In particular, female moral reformers contested the double standard that overlooked promiscuous behavior in men while harshly condemning women for the same offense. Their ardent rhetoric resonated with women across the country. With its widely-read periodical and auxiliary societies representing more than 50,000 women, the American Female Moral Reform Society became the first national reform movement organized, led, and comprised solely by women. 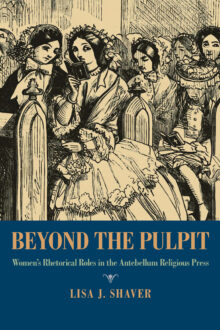 In the formative years of the Methodist Church in the United States, women played significant roles as proselytizers, organizers, lay ministers, and majority members. Although womenÆs participation helped the church to become the nationÆs largest denomination by the mid-nineteenth century, their official roles diminished during that time. In Beyond the Pulpit, Lisa Shaver examines Methodist periodicals as a rhetorical space to which women turned to find, and make, self-meaning.

In 1818, Methodist Magazine first published “memoirs” that eulogized women as powerful witnesses for their faith on their deathbeds. As Shaver observes, it was only in death that a woman could achieve the status of minister. Another Methodist publication, the Christian Advocate, was AmericaÆs largest circulated weekly by the mid-1830s. It featured the “LadiesÆ Department,” a column that reinforced the canon of women as dutiful wives, mothers, and household managers. Here, the church also affirmed women in the important rhetorical and evangelical role of domestic preacher. Outside the “Ladies Department,” women increasingly appeared in “little narratives” in which they were portrayed as models of piety and charity, benefactors, organizers, Sunday school administrators and teachers, missionaries, and ministersÆ assistants. These texts cast women into nondomestic roles that were institutionally sanctioned and widely disseminated.

By 1841, the LadiesÆ Repository and Gatherings of the West was engaging women in discussions of religion, politics, education, science, and a variety of intellectual debates. As Shaver posits, by providing a forum for women writers and readers, the church gave them an official rhetorical space and the license to define their own roles and spheres of influence. As such, the periodicals of the Methodist church became an important public venue in which womenÆs voices were heard and their identities explored.