Lon Savage (1928–2004) was a native of West Virginia. He worked in journalism for a decade before taking a job as assistant to the president of Virginia Tech, where he worked for twenty-three years. 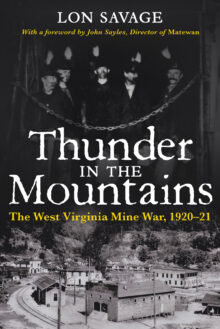 Thunder In the Mountains

The West Virginia mine war of 1920–21, a major civil insurrection of unusual brutality on both sides, even by the standards of the coal fields, involved thousands of union and nonunion miners, state and private police, militia, and federal troops. Before it was over, three West Virginia counties were in open rebellion, much of the state was under military rule, and bombers of the US Army Air Corps had been dispatched against striking miners.
The civil war began in the small railroad town of Matewan when Mayor C. C. Testerman and Police Chief Sid Hatfield sided with striking miners against agents of the Baldwin-Felts Detective Agency, who attempted to evict the miners from company-owned housing. Thunder in the Mountains was the first book-length account of this crisis in American industrial relations and governance, much neglected in historical accounts.