Mahmoud Gebril (formerly ElWarfally)was a Libyan diplomat and professor of political science at the University of Garyounis. 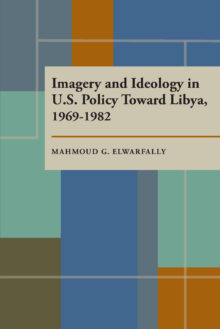 How close to reality was the official U.S. image of Libya through the Nixon-Ford, Carter, and Reagan administrations? After recounting the actions of Libya and the United States in the Middle East since 1969, ElWahrfally concludes that it was very far from accurate.Using personal interviews as well as scholarly research, ElWarfally demonstrates that recent U.S. relations with Libya, regardless of rhetoric, have been primarily determined by whether or not Libya serves U.S. interests in the region: maintaining access to Middle Eastern oil, protecting Israel, and limiting Soviet expansionism. Just as the official image of Libya has veered from one extreme to another, U.S. policy responses have also often conflicted with the publicly stated view.The Nixon administration was at first friendly toward Libya, even though Qaddafi ejected the U.S. military and nationalized the oil industry, because of Libya's avowed anticommunism and U.S. dependence on Libyan oil. After 1976, the official U.S. image was more hostile, and Libya was attacked as a destabilizing influence in the Middle East. Outrage reached new heights during the Reagan administration, which made several unsuccessful covert attempts to unseat Qaddafi, mounted an embargo and military provocations, and in 1986 bombed Libya on a pretext later revealed to be false. Combining theory with current history, this book demonstrates that fixed ideas and misinterpretation of events may have more to do with foreign policy behavior than facts do. Suggesting a new direction for research into relations between the superpowers and the Third World, it will interest scholars, students, and policymakers concerned with the Middle East.