Malte Rolf is professor of modern European history with an emphasis on Eastern Europe at the University of Oldenburg’s Institute of History. His main areas of research include the multiethnic empires of Eastern Europe during the long nineteenth century, the nation states of Central and Eastern Europe in the interwar period, and the Soviet Union during the Cold War era. He is the author of Imperiale Herrschaft im Weichselland: Das Königreich Polen im Russischen Imperium, Elites and Empire: Imperial Biographies in Russia and Austria-Hungary (1850–1918) and Soviet Mass Festivals, 1917–1991. 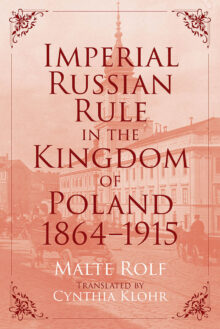 After crushing the Polish Uprising in 1863–1864,Russia established a new system of administration and control. Imperial Russian Rule in the Kingdom of Poland, 1864–1915 investigates in detail the imperial bureaucracy’s highly variable relationship with Polish society over the next half century. It portrays the personnel and policies of Russian domination and describes the numerous layers of conflict and cooperation between the Tsarist officialdom and the local population. Presenting case studies of both modes of conflict and cooperation, Malte Rolf replaces the old, unambiguous “freedom-loving Poles vs. oppressive Russians” narrative with a more nuanced account and does justice to the complexity and diversity of encounters among Poles, Jews, and Russians in this contested geopolitical space. At the same time, he highlights the process of “provincializing the center,” the process by which the erosion of imperial rule in the Polish Kingdom facilitated the demise of the Romanov dynasty itself.

Mass festivals were a trademark of twentieth-century authoritarianism, as seen in fascist Italy, Nazi Germany, and elsewhere. But nowhere was this phenomenon more prevalent than in the Soviet Union. Despite being a dominant feature of Soviet culture, these public spectacles have been largely overlooked as objects of study by historians.

Originally published in German, Malte Rolf’s highly acclaimed work examines the creation and perpetuation of large-scale celebrations such as May Day, the anniversary of the October Revolution, Harvest Day, and others throughout the Soviet era. He chronicles the overt political agendas, public displays of power, forced participation, and widespread use of these events in the Soviet drive to eradicate existing cultural norms and replace them with new icons of Soviet ideology. Rolf shows how the new Red Calendar became an essential tool in redefining celebrations in the Soviet Union.

Rolf traces the roots of Soviet mass festivals in disparate multiethnic celebrations, protests, and street marches during the late imperial era. He then contrasts these with postrevolutionary events that sought to dissolve ethnic rituals and unify the masses. By the end of the civil war, the Bolsheviks had a well-defined calendar of events and began to dictate the forms of public celebration in accordance with party rhetoric. In distant regions, organizers attempted to follow the models of Moscow and Leningrad, despite budgetary constraints and local resistance. In many outlying areas a hybridization of events developed as local customs merged with party mandates. People often made use of official holidays to adopt their own agendas, yet continued to follow the line of an official Soviet culture. Mass festivals were thus an important tool for Sovietizing the cultural landscape.

After the Second World War, the Soviets exported their festival culture to Eastern Europe and the Baltic states, which resulted in a melding of Soviet guidelines with national cultural forms. Additionally, Rolf compares and contrasts Soviet mass spectacles with mass events in Italy, Germany, and the United States to reveal their similar influence despite divergent political, cultural, and social systems.
In the Soviet Union, mass festivals continued through the time of Khrushchev, Brezhnev, and up until perestroika, despite their fading political impact. Rolf finds that in the end, Soviet celebrations became effectively ingrained in Russia’s post-Soviet national memory, which ironically was the intent of the original festival planners.