Marcia Davenport is the author of four other books and a biography of Mozart. Her autobiography, Too Strong for Fantasy, was published in 1967. 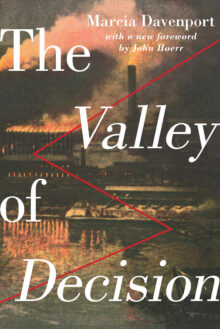 The Valley Of Decision

Originally published in 1942, The Valley of Decision was an instant success, and its story of four generations of the Scott family—owners and operators of a Pittsburgh iron and steel works—has since captured the imagination of generations of readers. Absorbing and complex, it chronicles the family’s saga from the economic panic of 1873 through the dramatic rise of American industry and trade unionism, through waves of immigration, class conflict, natural disaster, World War I, and Pearl Harbor. In 1945 it was made into a major motion picture starring Greer Garson and Gregory Peck. This reissue features a new foreword by noted steel industry historian John Hoerr, author of And the Wolf Finally Came, who places the novel in context as a classic depiction of twentieth-century America.