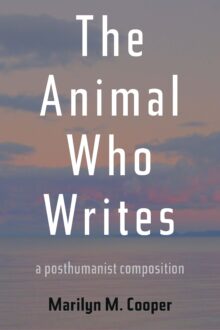 The Animal Who Writes

Writing begins with unconscious feelings of something that insistently demands to be responded to, acted upon, or elaborated into a new entity. Writers make things that matter—treaties, new species, software, and letters to the editor—as they interact with other humans of all kinds. As they write, they also continually remake themselves. In The Animal Who Writes, Cooper considers writing as a social practice and as an embodied behavior that is particularly important to human animals. The author argues that writing is an act of composing enmeshed in nature-cultures and is homologous with technology as a mode of making.