Marixa Lasso is assistant professor of history at Case Western Reserve University. She is a contributor to numerous books and has published articles in American Historical Review and Historical Reflections, among other journals. 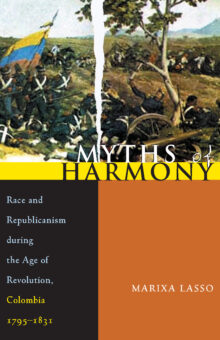 Race and Republicanism during the Age of Revolution, Colombia, 1795-1831

This book centers on a foundational moment for Latin American racial constructs. While most contemporary scholarship has focused the explanation for racial tolerance-or its lack-in the colonial period, Marixa Lasso argues that the key to understanding the origins of modern race relations are to be found later, in the Age of Revolution.
Lasso rejects the common assumption that subalterns were passive and alienated from Creole-led patriot movements, and instead demonstrates that during Colombia's revolution, free blacks and mulattos (pardos) actively joined and occasionally even led the cause to overthrow the Spanish colonial government. As part of their platform, patriots declared legal racial equality for all citizens, and promulgated an ideology of harmony and fraternity for Colombians of all colors. The fact that blacks were mentioned as equals in the discourse of the revolution and later served in republican government posts was a radical political departure. These factors were instrumental in constructing a powerful myth of racial equality-a myth that would fuel revolutionary activity throughout Latin America.
Thus emerged a historical paradox central to Latin American nation-building: the coexistence of the principle of racial equality with actual racism at the very inception of the republic. Ironically, the discourse of equality meant that grievances of racial discrimination were construed as unpatriotic and divisive acts-in its most extreme form, blacks were accused of preparing a race war. Lasso's work brings much-needed attention to the important role of the anticolonial struggles in shaping the nature of contemporary race relations and racial identities in Latin America.