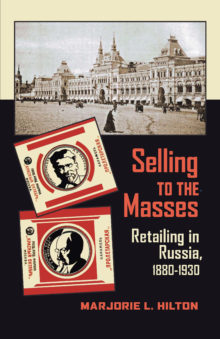 Selling to the Masses

Marjorie L. Hilton presents a captivating history of consumer culture in Russia from the 1880s to the early 1930s. She highlights the critical role of consumerism as a vehicle for shaping class and gender identities, modernity, urbanism, and as a mechanism of state power in the transition from tsarist autocracy to Soviet socialism.

Beginning in the late nineteenth century, Russia witnessed a rise in mass production, consumer goods, advertising, and new retail venues such as arcades and department stores. These mirrored similar developments in other European countries and reflected a growing quest for leisure activities, luxuries, and a modern lifestyle. As Hilton reveals, retail commerce played a major role in developing Russian public culture&mdash;it affected celebrations of religious holidays, engaged diverse groups of individuals, defined behaviors and rituals of city life, inspired new interpretations of masculinity and femininity, and became a visible symbol of state influence and provision.

Through monarchies, revolution, civil war, and monumental changes in the political sphere, RussiaÆs distinctive culture of consumption was contested and recreated. Leaders of all stripes continued to look to the “commerce of exchange” as a key element in appealing to the masses, garnering political support, and promoting a modern nation.

Hilton follows the evolution of retailing and retailers alike, from crude outdoor stalls to elite establishments; through the competition of private versus state-run stores during the NEP; and finally to a system of total state control, indifferent workers, rationing, and shortages under a consolidating Stalinist state.