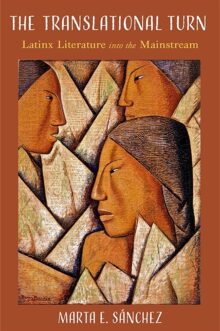 Latinx Literature into the Mainstream

No contemporary development underscores the transnational linkage between the United States and Spanish-language América today more than the wave of in-migration from Spanish-language countries during the 1980s and 1990s. This development, among others, has made clear what has always been true, that the United States is part of Spanish-language América. Translation and oral communication from Spanish to English have been constant phenomena since before the annexation of the Mexican Southwest in 1848. The expanding number of counter-national translations from English to Spanish of Latinx fictional narratives by mainstream presses between the 1990s and 2010 is an indication of significant change in the relationship. A Translational Turn explores both the historical reality of Spanish to English translation and the “new” counter-national English to Spanish translation of Latinx narratives. More than theorizing about translation, this book underscores long-standing contact, such as code-mixing and bi-multilingualism, between the two languages in U.S. language and culture. Although some political groups in this country persist in seeing and representing this country as having a single national tongue and community, the linguistic ecology of both major cities and the suburban periphery, here and in the global world, is bilingualism and multilingualism.