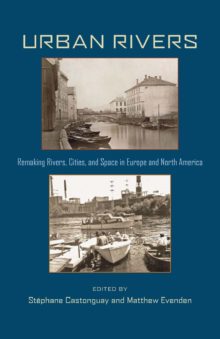 Remaking Rivers, Cities, and Space in Europe and North America

Urban Rivers examines urban interventions on rivers through politics, economics, sanitation systems, technology, and societies; how rivers affected urbanization spatially, in infrastructure, territorial disputes, and in floodplains, and via their changing ecologies. Providing case studies from Vienna to Manitoba, the chapters assemble geographers and historians in a comparative survey of how cities and rivers interacted from the seventeenth century to the present.

Rising cities and industries were great agents of social and ecological changes, particularly during the nineteenth century, when mass populations and their effluents were introduced to river environments. Accumulated pollution and disease mandated the transfer of wastes away from population centers. In many cases, potable water for cities now had to be drawn from distant sites. These developments required significant infrastructural improvements, creating social conflicts over land jurisdiction and affecting the lives and livelihood of nonurban populations. The effective reach of cities extended and urban space was remade. By the mid-twentieth century, new technologies and specialists emerged to combat the effects of industrialization. Gradually, the health of urban rivers improved.

From protoindustrial fisheries, mills, and transportation networks, through industrial hydroelectric plants and sewage systems, to postindustrial reclamation and recreational use, Urban Rivers documents how Western societies dealt with the needs of mass populations while maintaining the viability of their natural resources. The lessons drawn from this study will be particularly relevant to today's emerging urban economies situated along rivers and waterways.