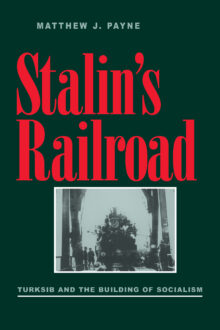 Turksib and the Building of Socialism

The Turkestano-Siberian Railroad, or Turksib, was one of the great construction projects of the Soviet Union’s First Five-Year Plan. As the major icon to ending the economic “backwardness” of the USSR’s minority republics, it stood apart from similar efforts as one of the most potent metaphors for the creation of a unified socialist nation.

Built between December 1926 and January 1931 by nearly 50,000 workers and at a cost of more 161 million rubles, Turksib embodied the Bolsheviks’ commitment to end ethnic inequality and promote cultural revolution in one the far-flung corners of the old Tsarist Empire, Kazakhstan. Trumpeted as the “forge of the Kazakh proletariat,” the railroad was to create a native working class, bringing not only trains to the steppes, but also the Revolution.

In the first in-depth study of this grand project, Matthew Payne explores the transformation of its builders in Turksib’s crucible of class war, race riots, state purges, and the brutal struggle of everyday life. In the battle for the souls of the nation’s engineers, as well as the racial and ethnic conflicts that swirled, far from Moscow, around Stalin’s vast campaign of industrialization, he finds a microcosm of the early Soviet Union.