Maud Chirio is associate professor of history at the University of Paris Est Marne-la-Vallee (UPEM). 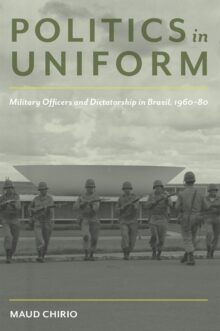 Military Officers and Dictatorship in Brazil, 1960-80

Between 1964 and 1985, Brazil lived under the control of a repressive, anticommunist regime, where generals maintained all power. Respect for discipline and the absence of any and all political activity was demanded of lower ranking officers, while their commanders ran the highest functions of state. Despite these circumstances, dozens of young captains, majors, and colonels believed that they too deserved to participate in the exercise of power. For two decades they carried on a clandestine political life that strongly influenced the regime’s evolution. This book tells their story. It is history viewed from below, that pays attention to the origins of these actors, their career paths, their words, and their memories, as recounted not only in traditionally available material but also in numerous personal interviews and unpublished civilian and military archives. This behind-the-scenes political life presents a new perspective on the nature and the internal operations of the Brazilian dictatorial military state.
This book is a translation, with expanded material for English-language readers, of Maud Chirio’s original Portuguese-language work, A política nos quartéis: Revoltas e protestos de oficiais na ditadura military brasileira, which was awarded the Thomas E. Skidmore Prize by the Brazilian National Archives and Brazilian Studies Association.