Maya J. Goldenberg is associate professor of philosophy in the Department of Philosophy at the University of Guelph. Her research centers on the philosophy of science and medicine, with interest in the connection between science and values. 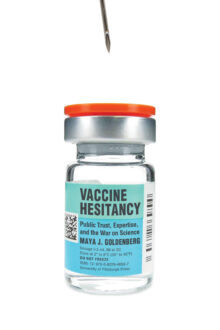 Public Trust, Expertise, and the War on Science

The public has voiced concern over the adverse effects of vaccines from the moment Dr. Edward Jenner introduced the first smallpox vaccine in 1796. The controversy over childhood immunization intensified in 1998, when Dr. Andrew Wakefield linked the MMR vaccine to autism. Although Wakefield’s findings were later discredited and retracted, and medical and scientific evidence suggests routine immunizations have significantly reduced life-threatening conditions like measles, whooping cough, and polio, vaccine refusal and vaccine-preventable outbreaks are on the rise. This book explores vaccine hesitancy and refusal among parents in the industrialized North. Although biomedical, public health, and popular science literature has focused on a scientifically ignorant public, the real problem, Maya J. Goldenberg argues, lies not in misunderstanding, but in mistrust. Public confidence in scientific institutions and government bodies has been shaken by fraud, research scandals, and misconduct. Her book reveals how vaccine studies sponsored by the pharmaceutical industry, compelling rhetorics from the anti-vaccine movement, and the spread of populist knowledge on social media have all contributed to a public mistrust of the scientific consensus. Importantly, it also emphasizes how historical and current discrimination in health care against marginalized communities continues to shape public perception of institutional trustworthiness. Goldenberg ultimately reframes vaccine hesitancy as a crisis of public trust rather than a war on science, arguing that having good scientific support of vaccine efficacy and safety is not enough. In a fraught communications landscape, Vaccine Hesitancy advocates for trust-building measures that focus on relationships, transparency, and justice.