Melissa Feinberg is assistant professor of history at University of North Carolina at Charlotte. 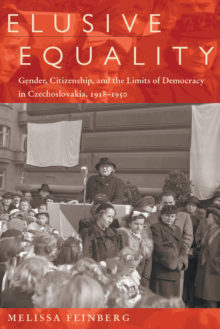 Gender, Citizenship, and the Limits of Democracy in Czechoslovokia, 1918-1950

When Czechoslovakia became independent in 1918, Czechs embraced democracy, which they saw as particularly suited to their national interests. Politicians enthusiastically supported a constitution that proclaimed all citizens, women as well as men, legally equal. But they soon found themselves split over how to implement this pledge. Some believed democracy required extensive egalitarian legislation. Others contended that any commitment to equality had to bow before other social interests, such as preserving the traditional family.
On the eve of World War II, Czech leaders jettisoned the young republic for an &ldquo;authoritarian democracy&rdquo; that firmly placed their nation, and not the individual citizen, at the center of politics. In 1948, they turned to a Communist-led &ldquo;people's democracy,&rdquo; which also devalued individual rights.
By examining specific policy issues, including marriage and family law, civil service regulations, citizenship law, and abortion statutes, Elusive Equality demonstrates the relationship between Czechs' ideas about gender roles and their attitudes toward democracy. Gradually, many Czechs became convinced that protecting a traditionally gendered family ideal was more important to their national survival than adhering to constitutionally prescribed standards of equal citizenship. Through extensive original research, Melissa Feinberg assembles a compelling account of how early Czech progress in women's rights, tied to democratic reforms, eventually lost momentum in the face of political transformations and the separation of state and domestic issues. Moreover, Feinberg presents a prism through which our understanding of twentieth-century democracy is deepened, and a cautionary tale for all those who want to make democratic governments work.