Michael R. Cude is assistant professor of history at Schreiner University in Kerrville, Texas, where he is also program coordinator for European Studies and for the Global Scholars program. 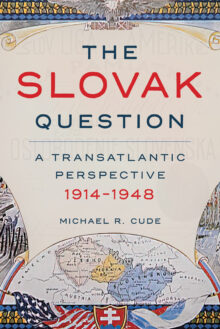 The so-called Slovak question asked what place Slovaks held—or should have held—in the former state of Czechoslovakia. Formed in 1918 at the end of World War I from the remains of the Hungarian Empire, and reformed after ceasing to exist during World War II, the country would eventually split into the Czech Republic and Slovakia after the “Velvet Divorce” in 1993.
In the meantime, the minority Slovaks often clashed with the majority Czechs over their role in the nation. The Slovak Question examines this debate from a transatlantic perspective. Explored through the relationship between Slovaks, Americans of Slovak heritage, and United States and Czechoslovakian policymakers, it shows how Slovak national activism in America helped the Slovaks establish a sense of independent identity and national political assertion after World War I. It also shows how Slovak American leaders influenced US policy by conceptualizing the United States and Slovakia as natural allies due to their connections through immigration. This process played a critical role in undermining attempts to establish a united Czechoslovakian identity and instead caused a divide between the two groups, which was exploited by Nazi Germany and then by other actors during the Cold War, and proved ultimately to be insurmountable.