Michelle D. Bonner is professor of political science at the University of Victoria. Her research examines questions of democratization and human rights through the lens of policing, media, and social movements. 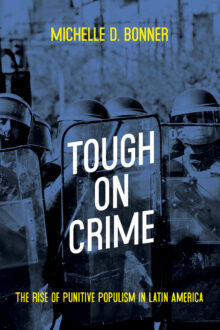 The Rise of Punitive Populism in Latin America

Crime and insecurity are top public policy concerns in Latin America. Political leaders offer tough-on-crime solutions that include increased policing and punishments, and decreased civilian oversight. These solutions, while apparently supported by public opinion, sit in opposition to both criminological research on crime control and human rights commitments. Moreover, many political and civil society actors disagree with such rhetoric and policies. In Tough on Crime, Bonner explores why some voices and some constructions of public opinion come to dominate public debate. Drawing on a comparative analysis of Argentina and Chile, based on over 190 in-depth interviews, and engaging the Euro-American literature on punitive populism, this book argues that a neoliberal media system and the resulting everyday practices used by journalists, state, and civil actors are central to explaining the dominance of tough-on-crime discourse.