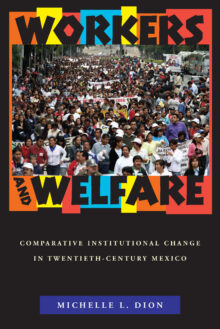 After the revolutionary period of 1910-1920, Mexico developed a number of social protection programs to support workers in public and private sectors and to establish safeguards for the poor and the aged. These included pensions, healthcare, and worker’s compensation. The new welfare programs were the product of a complex interrelationship of corporate, labor, and political actors. In this unique dynamic, cross-class coalitions maintained both an authoritarian regime and social protection system for some seventy years, despite the ebb and flow of political and economic tides.

By focusing on organized labor, and its powerful role in effecting institutional change, Workers and Welfare chronicles the development and evolution of Mexican social insurance institutions in the twentieth century. Beginning with the antecedents of social insurance and the adoption of pension programs for central government workers in 1925, Dion’s analysis shows how the labor movement, up until the 1990s, was instrumental in expanding welfare programs, but has since become largely ineffective. Despite stepped-up efforts, labor has seen the retrenchment of many benefits. Meanwhile, Dion cites the debt crisis, neoliberal reform, and resulting changes in the labor market as all contributing to a rise in poverty. Today, Mexican welfare programs emphasize poverty alleviation, in a marked shift away from social insurance benefits for the working class.