Minnie Bruce Pratt, a member of the graduate faculty at the Union Institute and University, is the author of four previous books of poetry, including Crime Against Nature, chosen as the Lamont Poetry Selection by the Academy of American Poets and a New York Times Notable Book of the Year, and Walking Back Up Depot Street, ForeWord Magazine‘s Gay/Lesbian Book of the Year. 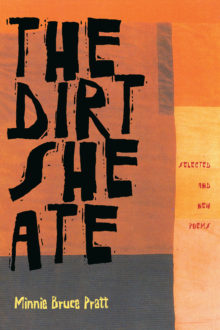 The Dirt She Ate

Suffused with pain and power, Minnie Bruce Pratt's poetry is as evocative of the swamps and streets of the southern United States as it is of the emotional lives of those too often forced into the margins of society. Vivid, lush, and intensely honest, these poems capture the rough edges of the world and force us to pay attention. 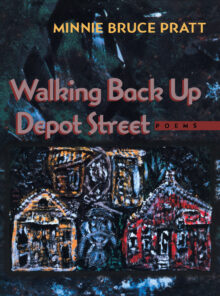 Walking Back Up Depot Street

In Pratt's fourth volume of poems, Walking Back Up Depot Street, we are led by powerful images into what is both a story of the segregated rural South and the story of a white woman named Beatrice who is leaving that home for the postindustrial North. Beatrice searches for the truth behind the public story-the official history-of the land of her childhood. She struggles to free herself from the lies she was taught while growing up-and she finds the other people who are also on this journey.

In these dramatically multivocal narrative poems, we hear the words and rhythms of Bible Belt preachers, African-American blues and hillbilly gospel singers, and sharecropper country women and urban lesbians. We hear the testimony of freed slaves and white abolitionists speaking against Klan violence, fragments of speeches by union organizers and mill workers, and snatches of songs from those who marched on the road to Selma. Beatrice walks back into the past and finds the history of resistance that she has never been taught; she listens to her fellow travelers as they all get ready to create the future.