Mitchell A. Orenstein is S. Richard Hirsch Associate Professor of European Studies at Johns Hopkins School of Advanced International Studies. He is the author of Out of the Red: Building Capitalism and Democracy in Post-Communist Europe and Privatizing Pensions: The Transnational Campaign for Social Security Reform. 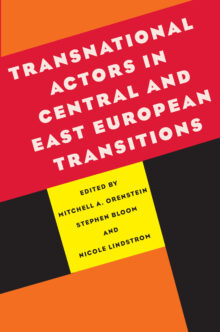 When Vladimir Putin claimed “outside forces” were at work during the Ukrainian Orange Revolution of 2004, it was not just a case of paranoia. In this uprising against election fraud, protesters had been trained in political organization and nonviolent resistance by a Western-financed democracy building coalition. Putin’s accusations were more than just a call to xenophobic impulses-they were a testament to the pervasive influence of transnational actors in the shaping of postcommunist countries.Despite this, the role of transnational actors has been downplayed or dismissed by many theorists. Realists maintain that only powerful states assert major influence, while others argue that transnational actors affect only rhetoric, not policy outcomes. The editors of this volume contend that transnational actors have exerted a powerful influence in postcommunist transitions. They demonstrate that transitions to democracy, capitalism, and nation-statehood, which scholars thought were likely to undermine one another, were facilitated by the integration of Central and East European states into an international system of complex interdependence. Transnational actors turn out to be the “dark matter” that held the various aspects of the transition together. Transnational actors include international governmental and nongovernmental organizations, corporations, banks, foundations, religious groups, and activist networks, among others. The European Union is the most visible transnational actor in the region, but there are many others, including the OSCE, NATO, Council of Europe, the Catholic Church, and the Soros Foundation. Transnational Actors in Central and East European Transitions assembles leading scholars to debate the role and impact of transnational actors and presents a promising new research program for the study of this rapidly transforming region.