Moises Arce is professor of political science at the University of Missouri. He is the author of Market Reform in Society: Post-crisis Politics and Economic Change in Authoritarian Peru. 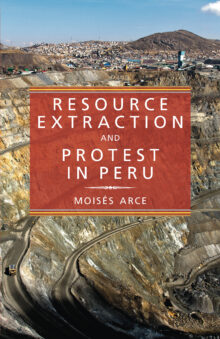 Resource Extraction and Protest in Peru

Natural resource extraction has fueled protest movements in Latin America and existing research has drawn considerable scholarly attention to the politics of antimarket contention at the national level, particularly in Ecuador, Bolivia, and Argentina. Despite its residents reporting the third-highest level of protest participation in the region, Peru has been largely ignored in these discussions.

In this groundbreaking study, Moisés Arce exposes a longstanding climate of popular contention in Peru. Looking beneath the surface to the subnational, regional, and local level as inception points, he rigorously dissects the political conditions that set the stage for protest. Focusing on natural resource extraction and its key role in the political economy of Peru and other developing countries, Arce reveals a wide disparity in the incidence, forms, and consequences of collective action.

Through empirical analysis of protest events over thirty-one years, extensive personal interviews with policymakers and societal actors, and individual case studies of major protest episodes, Arce follows the ebb and flow of Peruvian protests over time and space to show the territorial unevenness of democracy, resource extraction, and antimarket contentions. Employing political process theory, Arce builds an interactive framework that views the moderating role of democracy, the quality of institutional representation as embodied in political parties, and most critically, the level of political party competition as determinants in the variation of protest and subsequent government response. Overall, he finds that both the fluidity and fragmentation of political parties at the subnational level impair the mechanisms of accountability and responsiveness often attributed to party competition. Thus, as political fragmentation increases, political opportunities expand, and contention rises. These dynamics in turn shape the long-term development of the state.