Morgan Y. Liu is assistant professor of anthropology in the Department of Near Eastern Languages and Cultures at The Ohio State University. 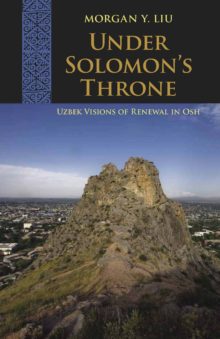 Uzbek Visions of Renewal in Osh

Winner of the 2014 Central Eurasian Studies Society Book Award in the Social Sciences.
Under Solomon's Throne provides a rare ground-level analysis of post-Soviet Central Asia's social and political paradoxes by focusing on an urban ethnic community: the Uzbeks in Osh, Kyrgyzstan, who have maintained visions of societal renewal throughout economic upheaval, political discrimination, and massive violence.
Morgan Liu illuminates many of the challenges facing Central Asia today by unpacking the predicament of Osh, a city whose experience captures key political and cultural issues of the region as a whole. Situated on the border of Uzbekistan and Kyrgyzstan—newly independent republics that have followed increasingly divergent paths to reform their states and economies—the city is subject to a Kyrgyz government, but the majority of its population are ethnic Uzbeks. Conflict between the two groups led to riots in 1990, and again in 2010, when thousands, mostly ethnic Uzbeks, were killed and nearly half a million more fled across the border into Uzbekistan. While these tragic outbreaks of violence highlight communal tensions amid long-term uncertainty, a close examination of community life in the two decades between reveals the way Osh Uzbeks have created a sense of stability and belonging for themselves while occupying a postcolonial no-man's-land, tied to two nation-states but not fully accepted by either one.
The first ethnographic monograph based on extensive local-language fieldwork in a Central Asian city, this study examines the culturally specific ways that Osh Uzbeks are making sense of their post-Soviet dilemmas. These practices reveal deep connections with Soviet and Islamic sensibilities and with everyday acts of dwelling in urban neighborhoods. Osh Uzbeks engage the spaces of their city to shape their orientations relative to the wider world, postsocialist transformations, Islamic piety, moral personhood, and effective leadership. Living in the shadow of Solomon's Throne, the city's central mountain, they envision and attempt to build a just social order.