Nancy Kang is assistant professor of multicultural and diaspora literatures at the University of Baltimore. She is coeditor of The Culture and Philosophy of Ridley Scott. 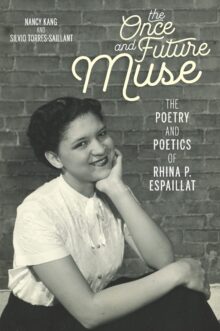 The Once and Future Muse

The Poetry and Poetics of Rhina P. Espaillat

The Once and Future Muse presents the first major study of the life and work of Dominican-born bilingual American poet and translator Rhina P. Espaillat (b. 1932). Beginning with her literary celebrity as the youngest poet ever inducted into the Poetry Society of America, it traces her relative obscurity after 1952 when she married and took on family and employment responsibilities, to her triumphant return to the poetry spotlight decades later when she reclaimed her former prestige with a series of award-winning poetry collections.
The authors define Espaillat’s place in American letters with attention to her formalist aesthetics, Hispanic Caribbean immigrant background, poetic community building, bilingual ethos, and domestically minded woman-of-color feminism. Addressing the temporality of her oeuvre—her publishing before and after the splitting of American literature into distinct ethnic segments—this work also highlights the demands that the social transformations of the 1960s placed on literary artists, critics, and readers alike.