Nathan Crowe is associate professor of history at the University of North Carolina Wilmington. 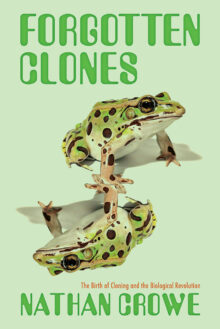 The Birth of Cloning and the Biological Revolution

Long before scientists at the Roslin Institute in Scotland cloned Dolly the sheep in 1996, American embryologist and aspiring cancer researcher Robert Briggs successfully developed the technique of nuclear transplantation using frogs in 1952. Although the history of cloning is often associated with contemporary ethical controversies, Forgotten Clones revisits the influential work of scientists like Briggs, Thomas King, and Marie DiBerardino, before the possibility of human cloning and its ethical implications first registered as a concern in public consciousness, and when many thought the very idea of cloning was experimentally impossible. By focusing instead on new laboratory techniques and practices and their place in Anglo-American science and society in the mid-twentieth century, Nathan Crowe demonstrates how embryos constructed in the lab were only later reconstructed as ethical problems in the 1960s and 1970s with the emergence of what was then referred to as the Biological Revolution. His book illuminates the importance of the early history of cloning for the biosciences and their institutional, disciplinary, and intellectual contexts, as well as providing new insights into the changing cultural perceptions of the biological sciences after Second World War.