Nicol C. Rae is professor of political science at Florida International University. He is the author of Conservative Reformers: The Republican Freshmen and the Lessons of the 104th Congress; Southern Democrats; and The Decline and Fall of Liberal Republicans: 1952 to the Present; and coauthor of Impeaching Clinton: Partisan Strife on Capitol Hill. 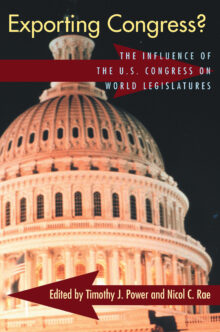 The Influence of U.S. Congress on World Legislatures

The United States Congress is often viewed as the world's most powerful national legislature. To what extent does it serve as a model for other legislative assemblies around the globe? In Exporting Congress? distinguished scholars of comparative legislatures analyze how Congress has influenced elected assemblies in both advanced and transitional democracies. They reveal the barriers to legislative diffusion, the conditions that favor Congress as a model, and the rival institutional influences on legislative development around the world.
Exporting Congress? examines the conditions for the diffusion, selective imitation, and contingent utility of congressional institutions and practices in Canada, the United Kingdom, Germany, the European Parliament, and the new democracies in Latin America and Eastern Europe. These scholars find that diffusion is highly sensitive to history, geography, and other contextual factors, especially the structure of political institutions and the balance of power between the executive and legislative branches. Editors Timothy Power and Nicol Rae place the volume's empirical findings in theoretical, comparative, and historical perspective, and establish a dialogue between the separate subfields of congressional studies and comparative legislatures through the concept of legislative diffusion.